This lyrical and immediate play moves between Scotland and a Twenty-First Century city under siege, where women in a war zone fight to stay alive, conjuring up memories, fragments of love and loss, as the night sky is lit up by heavy fire shaking them to their core.

Blessed was originally ignited by the Hall for Cornwall’s Bricks and Mortar project. In 2019 it undertook development at the Traverse Theatre in Edinburgh, as part of their Open Submissions programme.  It was also part of the Traverse’s First Stages Festival of new writing in November 2019.  https://www.traverse.co.uk/whats-on/event/first-stages-festival-blessed-exquisite-corpse 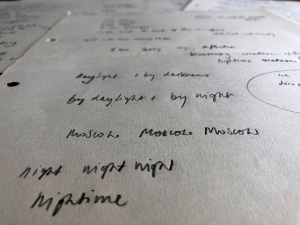 “You have woken me up. You have shaken me up.”

A butch tells us a love story. It’s her story. It’s dizzying and its dangerous and it spans a hundred years. It’s a story about hope and resistance, the distances we travel, and the lengths we go to when falling in love.

Part of Shift Scot’s Pride Plays in Association with the Traverse Theatre, Edinburgh in February 2020. https://www.traverse.co.uk/whats-on/event/pride-plays

The Cause  –  An Overture of Rebellion and Revolt

1913. Revolution stings the air. In an orchard two women meet. Their actions have divided them.  Divided a nation. Split their cause in two. What happens when the two women are suffrage leaders; Emmeline Pankhurst and Millicent Fawcett?

The Cause considers the impact of a lifetime of political campaigning on an individualAsking how far would you go for what you believe in? It also marks this centenary year of the first votes for some women in 1918. This dynamic production has an original musical score and film animation projected for thrilling visual effect.

Imagine that fifteen women gather.  Together they map eight geographic arteries across England and Wales. Reaching out to a singular destination.

At Land’s End a group of women start putting one foot in front of the other.  For them there is no road back.

And when these women become tens of thousands in Hyde Park it is July 26th 1913, and the women from Land’s End are there sharing the same oxygen.

Coasting was developed through Bristol Old Vic’s Ferment platform and produced in the Studio.

In a down-at-heel, windswept seaside town. Ocean is swishing his hips, donning his kohl and play both ends against the middle.  Pearl is playing the fruits, necking little green pills and dreaming of the next train out of town.

Falcon is dinning her uniform, falling for the wrong girl and taking risks that shake her carefully protected life into a thousand tiny pieces.  And then there’s the dead man on the beach.

Coasting is an elegiac mix of 1980s pop culture language and Polari, gay slang from the 1940-50s and is set in a faded seaside town, following best friends Pearl and Ocean as they stay together making small change from slot machines and escaping reality any way they can.

A woman returns to Dartmoor after years of exile.  Running away from what she has seen and ready to face what she left behind.

A Box Of Tricks production.

As an athlete trains and dreams of Olympic success in Kenya’s Rift Valley, a woman on Exmoor puts on a pair of trainers that do not belong to her. Between both the volcanic fault-lines connecting them across continents.

Awarded the Inspire Mark as part of the Cultural Olympiad 2012.

A young soldier returns home from Afghanistan after losing his best friend in combat.

A divide
widening
like a border
flattening out
expanding
chipping away
at what is delicate
precious.

A soldier is posted to Iraq and her lover mourns her departure. A mother searches desperately for her son and a daughter becomes consumed by the beauty of the desert. Four women, all caught up in the crossfire search for personal liberation, understanding, hope and love.  As unstoppable forces collide, brutality and tenderness meet.

Sometimes a heart wants to keep things hidden for a while.

A Theatre West commission and production. Part of a season of new plays in Bristol.

Shortlisted for the Meyer Whitworth Award at the National Theatre.  This was Natalie’s first produced play.

It’s 1998 and New Labour are in power.  They’ve kicked off their heels and peace in Northern Ireland is a priority.  The final negotiations for the Good Friday Agreement are coming to a close.  In the middle of it all is Mo.